Congratulation to the Asian Community for celebrating Chinese New Year 2020.

Congratulation to the Asian  Community on the occasion for celebrating Chinese New Year 2020.

Permanent link to this article: https://site.belizescoutfoundation.org/2020/01/24/congratulation-to-the-asian-community-for-celebrating-chinese-new-year-2020/

Remember the Founder of the Scout Movement, Lord Baden Powell as we commemorate the 79th year of his death.

Today January 8, 2020, we pause to remember the Founder of the Scout Movement, Lord Baden Powell as we commemorate the 79th year of his death.

So who is Baden Powell? 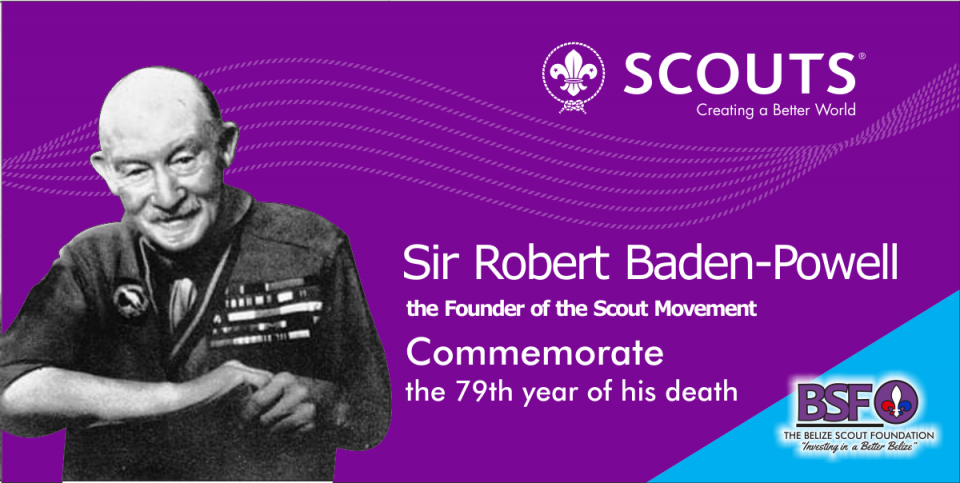 Born on February 22, 1857, London, England – died January 8, 1941, Nyeri, Kenya), the British army officer who became a national hero for his 217 – day defense of Mafeking (now Mafikeng) in the South African War of 1899 – 1902. He later became famous as a founder in 1908 of the Boy Scouts and as a cofounder in 1910 of a parallel organization for girls, the Girl Guides. The American Girl Guide organization was founded in 1912 and soon changed its name to the Girl Scouts of the United States of America.

In 1884 – 85 Baden-Powell became noted for his use of observation balloons in warfare in Bechuanaland (now Botswana) and Sudan. From October 12, 1899, to May 17, 1900, he defended Mafeking, holding off a much larger Boer force until the siege was lifted. After the war, he recruited and trained the South African constabulary. On returning to England in 1903, he was appointed inspector-general of cavalry, and the following year he established the Cavalry School, Netheravon, Wiltshire. He was promoted to lieutenant general in 1907.

Having learned that his military textbook Aids to Scouting (1899) was being used for training boys in woodcraft, Baden-Powell ran a trial camp on Brownsea Island, off Poole, Dorset, in 1907, and he wrote an outline for the proposed Boy Scout movement. Scout troops sprang up all over Britain, and for their use, Baden-Powell’s Scouting for Boys was issued in 1908. He retired from the army in 1910 to devote all his time to the Boy Scouts, and in the same year, he and his sister Agnes Baden-Powell (1858–1945) founded the Girl Guides. His wife, Olave, Lady Baden-Powell (1889 – 1977), also did much to promote the Girl Guides. In 1916 he organized the Wolf Cubs in Great Britain (known as Cub Scouts in the United States) for boys under the age of 11. At the first international Boy Scout Jamboree (London, 1920), he was acclaimed Chief Scout of the World.

Permanent link to this article: https://site.belizescoutfoundation.org/2020/01/09/remember-the-founder-of-the-scout-movement-lord-baden-powell-as-we-commemorate-the-79th-year-of-his-death/